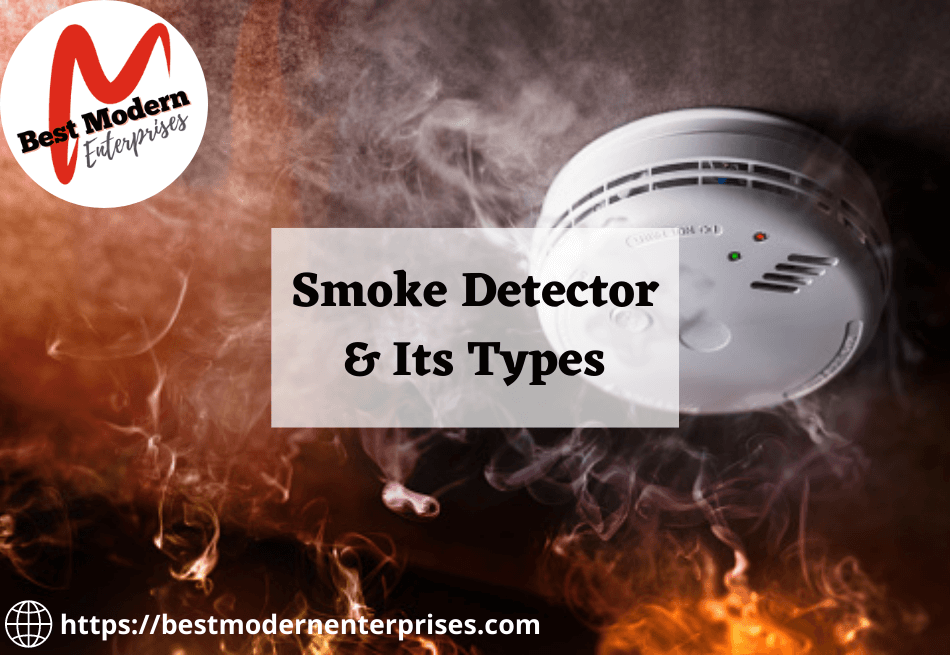 A smoke detector is a device used to warn occupants of a building of the presence of a fire. Before it reaches a spreading stage and inhibits escape or attempts to extinguish it. On sensing smoke, the detectors emit a loud, high-pitched alarm tone. Usually warbling or intermittent, and usually accompanied by a flashing light. There are two types of smoke detectors: photoelectric and ionization. Photoelectric smoke detectors use a light-sensitive cell in either of two ways. In one type, a light source, e.g., a small spotlight, causes a photoelectric cell to generate current. That keeps an alarm circuit open—until visible particles of smoke interrupt the ray of light. Breaking the circuit and setting off the alarm. The other photoelectric detector is widely used in private dwellings. Employs a detection chamber shape. So that the light-sensitive element cannot “see” the light source. When particles of smoke enter a part of the chamber that aligns with both the LED. In the photocell, the particles diffuse or scatter the light ray so it can be “seen” by the photocell. As a result, a current generates by the light-sensitive cell and the alarm trigger.

There are two types of smoke detectors- A photoelectric detector and an ionization detector.

Occasionally, you will walk into a store and a bell will go off as you cross the threshold. If you look, you will often notice that a photo beam detector is being used. Near the door on one side of the store is a light (either a white light and a lens or a low-power laser). And on the other side is a photodetector that can “see” the light.

When you cross the beam of light, you block it. The photodetector senses the lack of light and triggers a bell. You can imagine how this same type of sensor could act as a smoke detector. If it ever got smoky enough in the store to block the light beam, the bell would go off. But there are two problems here:

It is not very sensitive.

Photoelectric smoke detectors, thus, use light in a different way. Inside the smoke detector, there is a light and a sensor. But they are positioned at 90-degree angles to one another, like this:

In the normal case, the light from the light source on the left shoots straight across and misses the sensor. When smoke enters the chamber, yet, the smoke particles scatter the light.

The sensor then sets off the horn in the smoke detector.

Photoelectric detectors are better at sensing smoky fires, such as a smoldering mattress. 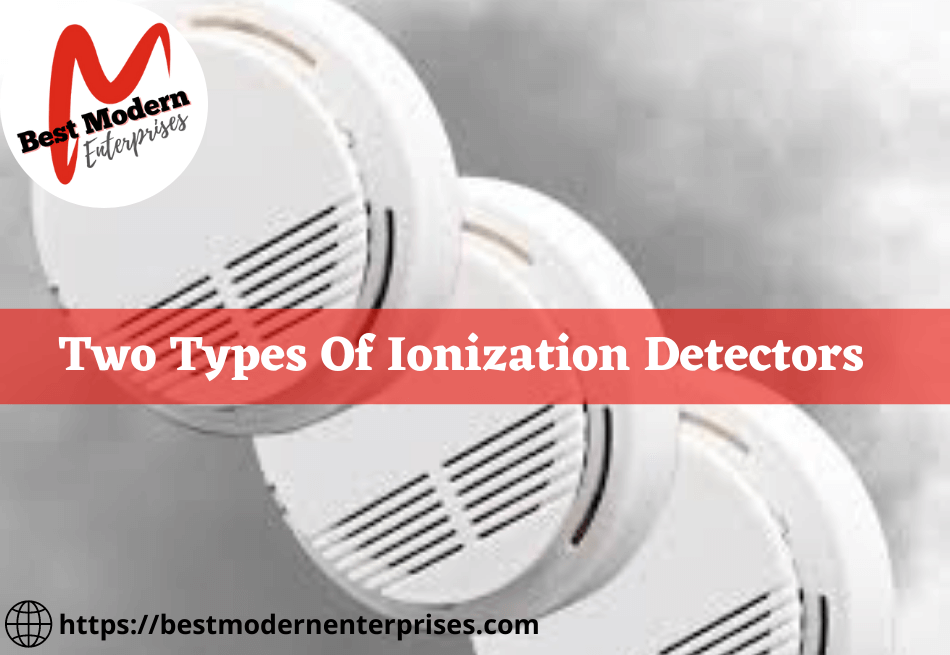 Ionization smoke detectors use an ionization chamber. A source of ionizing radiation to detect smoke. This type of smoke detector is more common. Because it is inexpensive and better at detecting the smaller amounts of smoke produced by flaming fires. Another way to talk about the amount of americium in the detector. This is to say that a typical detector contains 0.9 microcuries of americium-241. A curie is a unit of measure for nuclear material.

An ionization chamber is very simple. It consists of two plates with a voltage across them. Along with a radioactive source of ionizing radiation, like this:

The alpha particles generated by the americium have the following property. They ionize the oxygen and nitrogen atoms of the air in the chamber. To “ionize” means to “knock an electron off of.” When you knock an electron off of an atom. you end up with a free electron (with a negative charge) and an atom missing one electron (with a positive charge). The negative electron attracts to the plate with a positive voltage. The positive atom attracts to the plate with a negative voltage. The electronics in the smoke detector sense the small amount of electrical current. That these electrons and ions moving toward the plates represent. When smoke enters the ionization chamber, it disrupts this current. The smoke particles attach to the ions and neutralize them. The smoke detector senses the drop in current between the plates and sets off the horn.

In the above blog, we have discussed smoke detectors & its types. For more information about electric things. Visit our site Best Modern Enterprises.